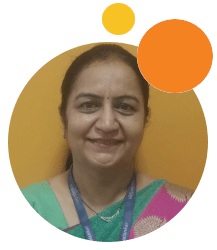 I believe that making a classroom interactive by asking questions, encouraging discussion, using visual aids and demonstrations are important not only in enhancing learning but also in maintaining enthusiasm.

I was born in a small town Bharuch in Gujarat. My father was a goldsmith and had his small rental shop. I have three elder brothers. There was an earthquake in Bharuch in 1970, which made us homeless. I was one and a half years old at that time. I was almost buried under debris. It’s because someone had pulled me out that I survived.

We had shifted from Bharuch to Jambusar few months after that incident. My entire school life was spent in Jambusar. At that time its population was below 10000 people. I have completed my preprimary education in municipal school. I have completed my primary and secondary education in Jambusar at S. & I. C. Nagar Panchayat High School. I used to secure the first or second position and was getting distinction almost all the time during my school tenure. I used to be the CR and was participating in all school activities like singing completion, prayers citation, elocution competition, sports etc.

I opted for science stream in 10th standard, when it was a very uncommon choice for a girl in the village. I was the only girl to select science in my class. Initially my mother was reluctant with the choice but my neighbors supported my decision and ultimately my mother was convinced. I achieved ‘National Merit Scholarship’ from 11th std till last year of graduation being amongst first 500 in Gujarat in 10th standard. There was no college available for the science stream in my village and I had to change the city for further education.

I completed my B.Sc. with Physics as main subject and chemistry and mathematics as subsidiary subjects, PGDCA and MCA – all with first-class, more than 65 % all time. Then I worked as a programmer and senior programmer in industries in Gujarat.

After I got married, my life awaited new challenges in Mumbai. After 2 years of break in my career I had decided to start working again. Fortunately, I got the opportunity to work as an assistant professor in an educational institution. I started my career in Mumbai with K.C. College, followed by Thakur college, Nirmala College, and Wilson College. Soon, I joined Vidyalanlar School of Information Technology in 2016.

After joining Vidyalanlar School of Information Technology, I published 8 research papers. First research paper in Feb 2017. It was totally drastic change in my growth as a teacher. During the same period, I became a coordinator for spoken-tutorial online courses. In January 2018, I also became M.Sc. I.T. coordinator, followed by becoming a co-ordinator of Swayam NPTEL MOOC courses, In 2019. Then I got an opportunity to author and publish one book on Java and two books on Python for Computer Science students. I got the opportunity to enroll for a Ph.D. also. Currently, I am pursuing my Ph.D. Vidyalankar is indeed a place of opportunities and have enabled me to develop as a teacher, more than I could have ever imagined.