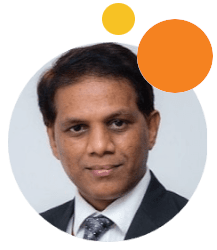 But as said if a mother decides something, she ensures it’s done. After six months, on her request, once again my father took me for an interview round in that school. It was my fortune or my mother’s blessings that came true and I cleared the interview. I had to re-start my education from Sr. K.G. once again. Thus, after completing my schooling, came a time when I had to decide to pick up a stream to pursue my further studies. My parents wanted me to take up science but somehow I convinced them for commerce. Thinking that opting for commerce stream would be an entry pass to corporate world.

During my college days, Accounts was always a mind pricking subject for me but with my determination and efforts I managed to get hands on that subject and completed my graduation as well as post-graduation degree. While studying I gave tuitions in English subject at very nominal fee and at times even free of cost for some poor and needy students.

After completing my education, I started working for CITI Bank in Personal Finance dept. Thereafter, I joined Standard charted and then a Broking firm India Infoline. It was 2008 global recession which severely affected all the broking firms as the Stock Market crashed, and I had no option but to seek job in a sector that was somehow coping up with the recession. It was the Insurance sector that had few openings and I joined an insurance company HDFC Life. Working for two years there, I shifted back to the broking organization Kotak Securities Ltd. My entire journey in corporate sector was Finance. I have worked with all three major Finance organizations regulated by RBI, IRDA and SEBI.

It was in 2012 August when I joined VSIT. It all started when one student from VSIT staying in my building use to come to me for clearing her subject related doubts. She would always tell me why you don’t come to my college to give an interview and enter the teaching field. It was almost a year now that she would keep telling me the same thing. Initially I never considered this as an option, but one day it so happened that I thought I should consider teaching as an option. The next day I had a meeting with a client in Wadala. After meeting the client, I visited Vidyalankar College for an interview; so that I could atleast tell that student that I have been there. As asked by the college I gave a demo lecture and met the H.R. They asked me to meet the director on the same day if possible or else I would have to come again. I was of the opinion if the process is completed today its ok or else I am not coming again. But it so happened that the entire process was completed and the next question asked was when you can join at the earliest. Taking a decision at the same moment was not possible, as I had to go back to my company inform them and discuss with my colleagues and parents too. So I asked them for some time. However, they suggested that you go as teaching is good job and a noble profession too; they even added that my corporate experience will help me to bridge the gap between academics and corporate especially in finance related subjects. Since then I am associated with VSIT. I am the HOD of BFM department and teach Financial Market subjects. I believe in giving my students a practical exposure towards industry.